After an earlier drilling attempt failed to collect anything, the rover appeared to gather its first sample. But mission managers need to take another look before sealing the tube.,

The rock appeared right where it should have been — captured within the drill bit of NASA’s latest Mars rover, Perseverance.

After a perplexing failure last month, NASA’s latest Mars rover, Perseverance, was able to successfully collect a sample of rock on Wednesday. The rover took pictures of the rock in the tube and sent the images to Earth so that mission managers could be sure they had not come up empty again. The rock was there.

Adam Steltzner, the chief engineer for the rover, enthused on Twitter on Thursday morning, describing it as “one beautifully perfect cored sample.”

Now that is one beautifully perfect cored sample, if I do say so myself! Be patient, little sample, your journey is about to begin. #SamplingMars https://t.co/jOtNGKjeAe

Holding the tube vertically, Perseverance shook the tube, held vertically with the opening on top, Five shakes lasting one second each were to help the rock core settle farther down into the collection tube.

In subsequent photographs, the core could no longer be seen. Had it disappeared? Was Mars messing with us?

Late in the day on Thursday, NASA said in a news release that the mission team remained confident the rock was still in the collection tube, hidden in shadows. It would be surprising if the shaking could have caused the rock to jump up and out of the tube. But NASA said the rover would take more pictures when the lighting was better before sealing the tube and putting it away in its belly.

“We did what we came to do,” Jennifer Trosper, the project manager for the mission, said in the news release. “We will work through this small hiccup with the lighting conditions in the images and remain encouraged that there is sample in this tube.”

One of the key tasks for Perseverance is to collect rocks and soil that will eventually be brought back to Earth by another mission so that scientists can exhaustively study them using state-of-the-art instruments in their laboratories, the way they have with moon rocks from the Apollo and Soviet missions of the 1960s and ’70s.

What the scientists and engineers did not want was a repeat of Aug. 6, the first time that Perseverance drilled, collected and sealed a rock sample. Everything appeared to go flawlessly — except the tube was empty.

“It was definitely a bit of despair,” Kenneth A. Farley, a professor of geochemistry at the California Institute of Technology and the mission’s project scientist, said in an interview before the latest drilling attempt. “Everybody was so ready to declare victory. And then somebody said, ‘Yeah, here’s a picture, there’s nothing in the tube.’ It was very deflating.”

The rover used its cameras to look around and see if the rock core had somehow dropped to the ground. But there was no sign of it. The rock sample had, it seemed, vanished. 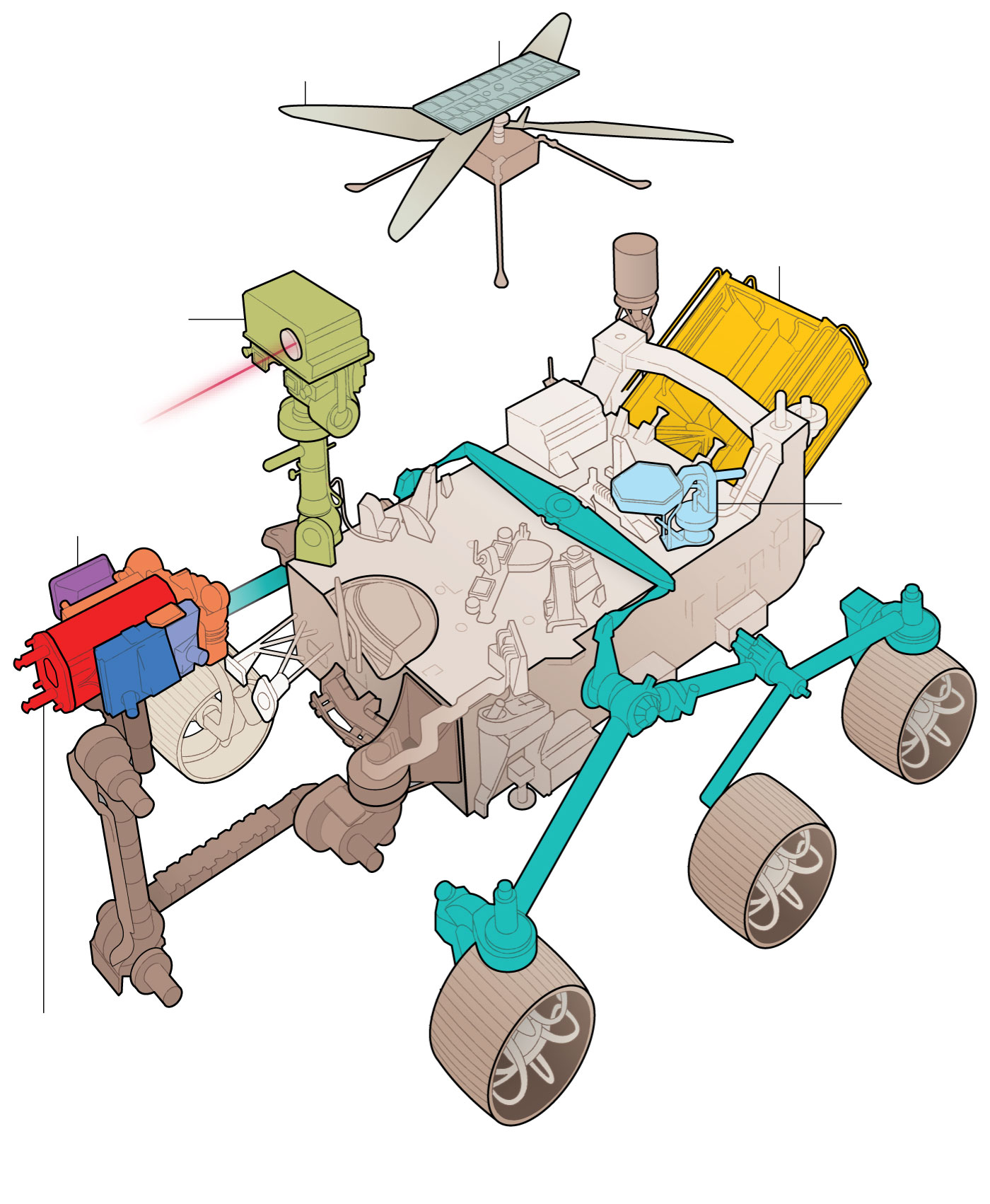 The four-pound aircraft will communicate wirelessly with the Perseverance rover.

The plutonium-based power supply will charge the rover’s batteries.

Instruments will take videos, panoramas and photographs. A laser will study the chemistry of Martian rocks.

Will identify chemical elements to seek signs of past life on Mars.

Will transmit data directly to Earth.

A turret with many instruments is attached to a 7-foot robotic arm. A drill will extract samples from Martian rocks. The Sherloc device will identify molecules and minerals to detect potential biosignatures, with help from the Watson camera.

The 2,200 pound rover will explore Jezero Crater. It has aluminum wheels and a suspension system to drive over obstacles. 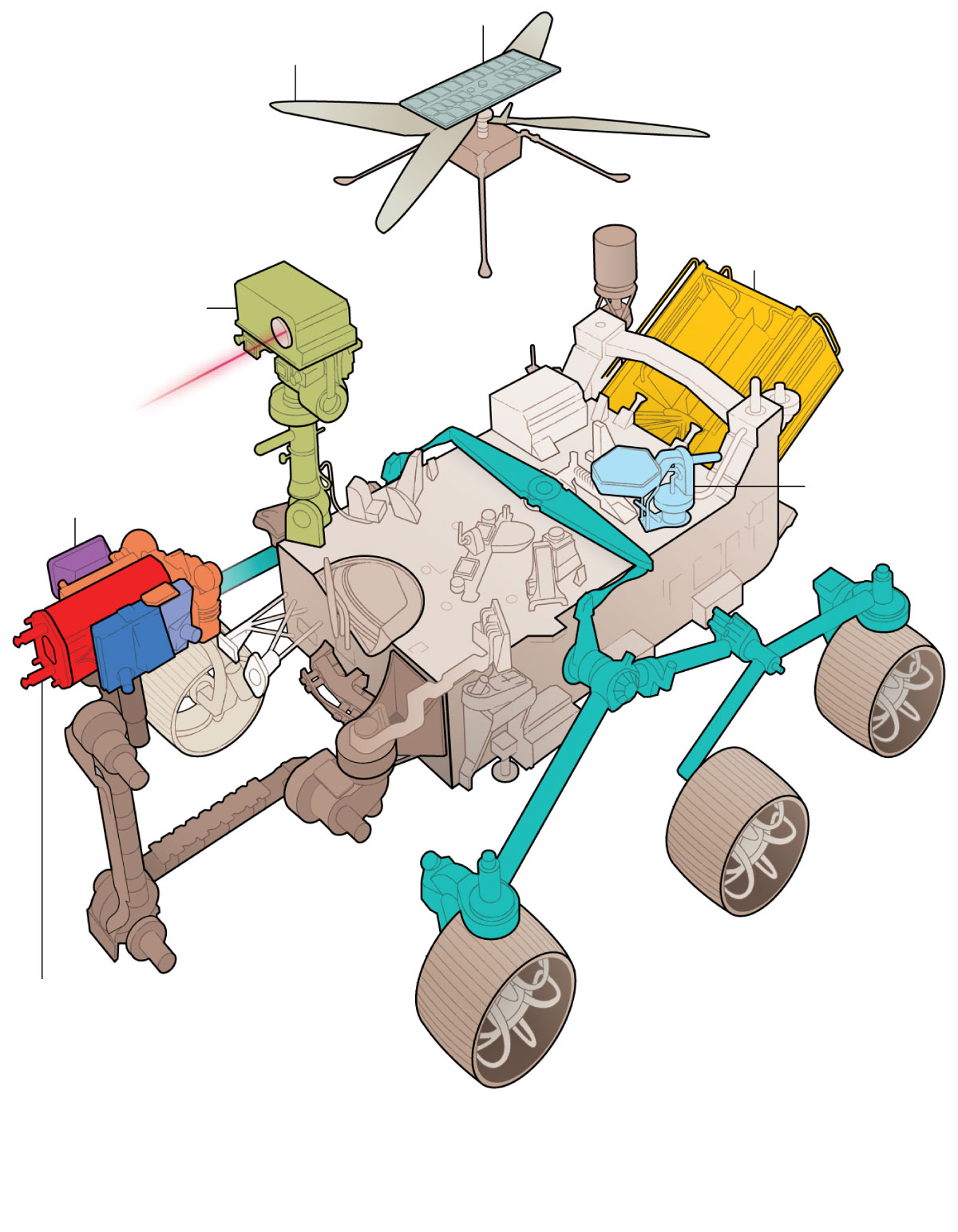 The aircraft will communicate wirelessly with the rover.

The plutonium-based power supply will charge the rover’s batteries.

Instruments will take videos, panoramas and photographs. A laser will study the chemistry of Martian rocks.

Will identify chemical elements to seek signs of past life on Mars.

A turret with many instruments is attached to a 7-foot robotic arm. A drill will extract samples from Martian rocks. The Sherloc device will identify molecules and minerals to detect potential biosignatures, with help from the Watson camera.

The 2,200 pound rover will explore Jezero Crater. It has aluminum wheels and a suspension system to drive over obstacles. 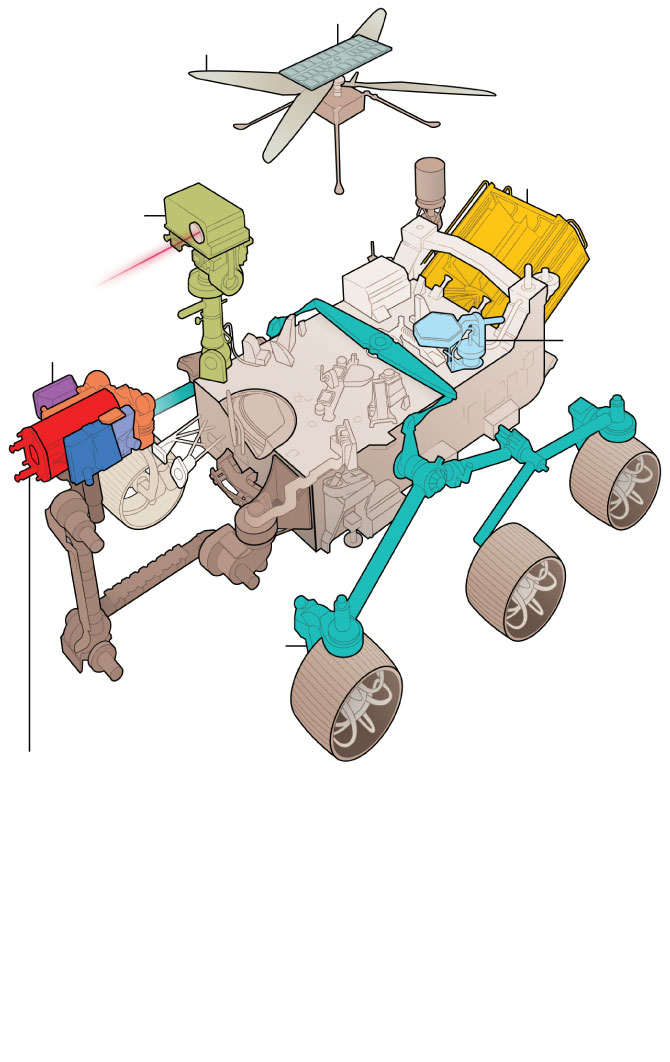 A turret with many instruments is attached to a 7-foot robotic arm. A drill will extract samples from Martian rocks. The Sherloc device will identify molecules and minerals to detect potential biosignatures, with help from the Watson camera. PiXl will identify chemical elements to seek signs of past life on Mars.

The greatest worry was that Perseverance’s intricate drilling mechanism had suffered a crippling malfunction and that it would not be able to collect any samples at all. But after reviewing the data, the engineers and scientists concluded it was the rock, not the rover, that was to blame.

“The act of coring into it resulted in the rock breaking apart into powder and small fragments of material, which were not retained in the tube due to their size,” Ms. Trosper said.

Dr. Farley concedes that there were warning signs that the August rock might not have been the best one to try first. Its brown color indicated rust, it contained salts, and it was full of holes. That meant it had been sitting in a lake or groundwater for a very long time. That was potentially a fantastic scientific find. The mineralogical changes caused by water could illuminate billions of years ago when Mars was wet and habitable.

But a rusty, salty rock filled with holes could also be very crumbly. “We learned a lesson,” Dr. Farley said.

The Aug. 6 operation was not a complete loss. The tube contains sealed, uncontaminated Martian air, something the scientists had planned to collect at another time.

For the second drilling attempt on Wednesday, the rover drove about 400 yards onto a ridge slightly higher than the surrounding landscape, “and we selected the hardest looking rock you could find up there,” Dr. Farley said. This boulder, nicknamed Rochette, survived through the ages and was not eroded away by the winds, strong evidence that it is not crumbly.

The boulder looks like a piece of a hardened lava, which can be precisely dated. Thus, scientists will be able to determine how old this boulder is, and it helps pin down the ages of lower, older layers.

“This was a high-value target,” Dr. Farley said.

It will be more than a decade before Dr. Farley and other scientists can get their hands on it. Perseverance at some point will probably drop the hermetically sealed tubes on the Martian surface, to await pickup by a future rover, still on the drawing board.

That rover will take the rock samples to a small rocket that will launch the samples on a trip back to Earth, but they will not arrive until the 2030s.

Perseverance will continue exploring a 28-mile-wide crater named Jezero, especially an ancient, dried-up river delta along the western rim. The rover is accompanied by a small robotic helicopter named Ingenuity that was added to the mission to test the ability to fly through the thin air of Mars.

While NASA had planned to leave Ingenuity behind after a series of test flights, it proved so successful that the helicopter continues to follow along with Perseverance, acting as a scout of the terrain ahead. And it is improving the rover’s scientific mission, too.

The scientists had intended to visit a site that looked striking in images taken from orbit. “Then we looked at the helicopter images,” Dr. Farley said, and were less impressed.

“We will save a bunch of time by not driving over there,” he said.

How to Map a Fly Brain in 20 Million Easy Steps